Introducing the Center for Human Rights and the Arts 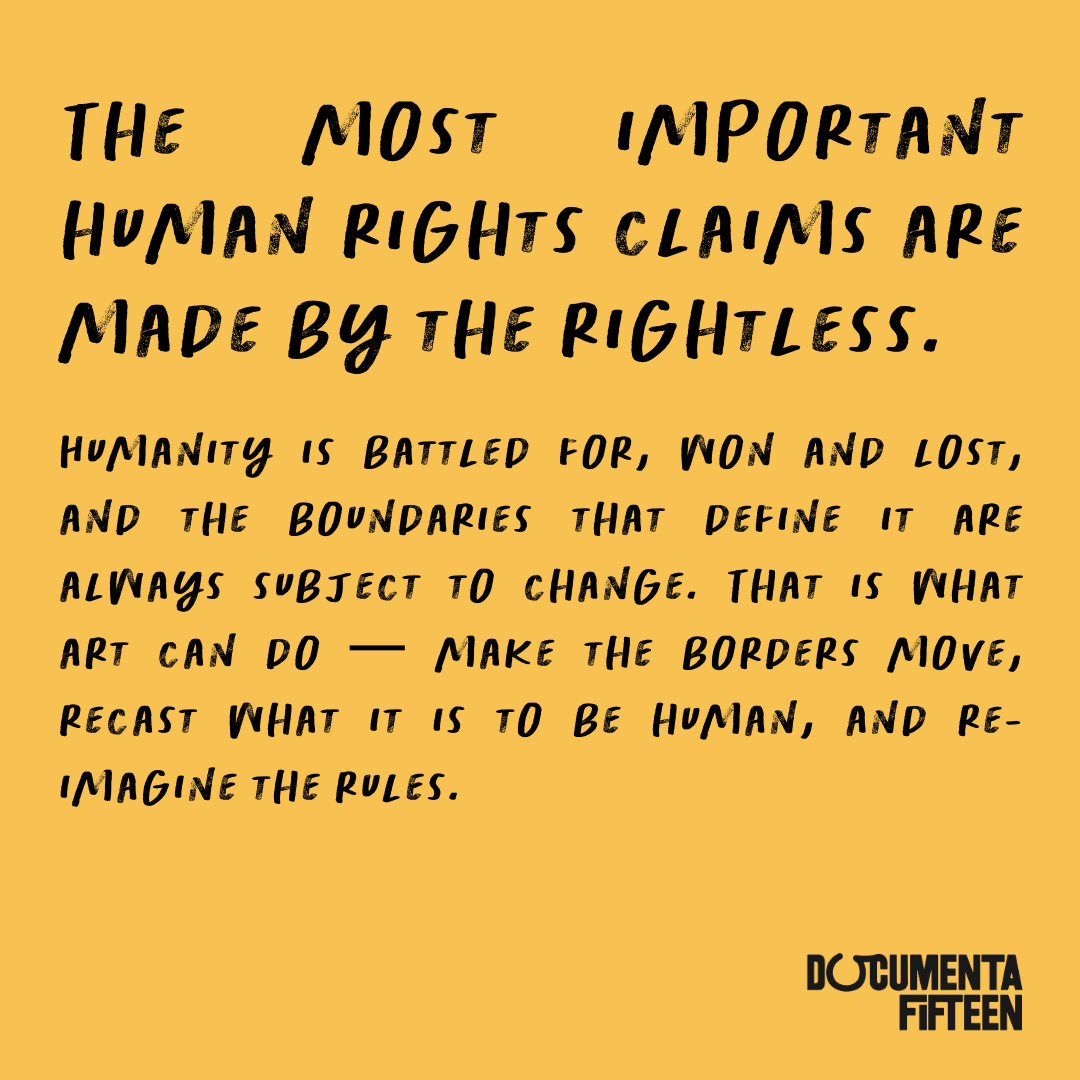 To begin, a parti pris. As individuals and as part of a team that views the Palestinian cause for liberation as an indivisible part of the global struggle for human rights, we want to state our dismay at the various forms of silencing to which voices for justice in Palestine have been subjected to in Germany – including attacks on Palestinian artists participating in Documenta and the curators who are in solidarity with them. Colleagues of ours have been among the incriminated, and among those calling attention to this injustice. At a time when long-standing Israeli and international human rights organizations have joined their Palestinian counterparts in naming Israeli policies toward Palestinians as the international crime of apartheid, and while many artistic spaces continue to reproduce the marginalization of Palestinian voices, we cannot speak about the intersection of human rights and the arts without denouncing all forms of racism, including antisemitism, and without talking about the Palestinian struggle for liberation and those who oppose it.

There are no human rights without someone demanding them or protesting against their absence. There are no human rights without the arts. A decade or so ago, media theorist Sharon Sliwinski argued in Human Rights in Camera (2011) that “the long struggle for universal human rights is a story of atrocious events and courageous campaigners, but it is also a lively aesthetic scene full of pictorial images and fascinated spectators.” More recently, in Writing and Righting (2020), presented at literature scholar Lyndsey Stonebridge offered a cautious but explosive summation of that view: “There are plenty of super-creative civilizations that never had anything like human rights; what is less clear is whether modern human rights would have been invented without the arts.” Stonebridge and Sliwinski share, along with a host of other thinkers and activists around the world, a contention that aesthetic operations are not merely useful to advocacy or helpful in claiming rights, nor are images and performances and rhetorical creativity just contingently present in some human rights campaigns. Rather, from the registration of a violation to the manifestation of a subject, the event of the human rights claim is thoroughly aesthetic.

It is not possible to think about human rights—let alone advocate for or lay claim to them, in practice—without researching and engaging with the arts. The most innovative activists at work today are artists, architects, coders, data visualizers, performers, and media makers. And this is not only, nor even most importantly, because no campaign for rights can go without symbols, hashtags, images, stories, film, and (social) media. The arts are not the decorations or the illustrations or the attention-getters for the real politics. Artistic dissidence, formal innovation, critical unlearning, imaginative expansion: these are the essence of all powerful campaigns to claim and expand rights—even when artists and artworks in the conventional sense are not involved.

But, today, more and more, the arts are directly involved: statues and monuments, sounds and images, not to mention looted art objects, are contested terrain. Even terrain itself—terrain marked as culturally meaningful by artistic operations—is contested in contemporary rights struggles. Open-source investigations and civic visual forensics have become crucial forms of resistance and advocacy, as have interactive and community-based cultural projects. Protests are performances, and demands for rights and justice take the form of exhibitions, demonstrations, and visual presentations. They are staged, in the best sense of the term, in institutions, on the streets, and through the screen.

And as governments around the world today resort routinely to fiction, spectacular and staged oppression, and the aesthetic technologies of sound and image in the exercise of power, artistic and cultural expressions of critique and disagreement have become all the more necessary in the service of understanding and contesting them.

Yes, there is violence, oppression, and exclusion, and, yes, there are legal and political responses. But to get things going there is often a cry, a clamor, an appeal, an address—a creative act addressed to another, and more often than not to another who does not recognize, hear, or acknowledge the speaker as having anything to say or even as speaking (or writing, drawing, performing). The aesthetic operation is not a simple sentence or image exchanged between equals. It is a protest against the failure to see and hear, an attempt to overcome that exclusion, a project of basic transformation in the structures that allow seeing and hearing. So continuing to work within the existing frames, the ones that enforce invisibility and exclusion, is not going to work. Words and images and sounds that create the stage, that change the frame, that warp the rules, are vital.

Ironically, sometimes that can happen—as philosopher Jacques Rancière has shown with a vignette set on the Aventine Hill in ancient Rome—by simply copying what others have said, so that they can finally hear and see that you are there too. That, too, is a creative act, an artistic action, one that remakes separate worlds into a shared one, redistributes the identities of the participants and the relative power they can exercise.

In a way, all human rights claims are made by missing people, by people missing from among those who count as people, by the absent or the disappeared. The most important human rights claims are made by the rightless. Humanity is battled for, won and lost, and the boundaries that define it are always subject to change. That is what art can do — make the borders move, recast what it is to be human, and re-imagine the rules.

The Center for Human Rights and the Arts was born out of this re-imagination. As a team of human rights professors and artists, we knew very well where human rights and the arts intersected in a simplified and questionable manner. We did not want to categorize the relationship between human rights and the arts as a matter of content on the one side and form on the other. The struggle for human rights cannot simply provide a dramatic narrative for artists’ works. Similarly, art is not merely a tool for propagating human rights campaigns. In fact, art has too often been simply thrown at problems. Governments and others instrumentalize art to fix problems—sometimes to help racialized minorities assimilate, at other times to whitewash wars and occupations. The “art fix” is a dream solution for all sorts of issues ranging from refugees to environmental disasters. We started the Center with this nightmare in mind.

Two years and hundreds of conversations and collaborations with artists and activists around the world later, we feel closer to knowing where our practices intersect in an effective way. We created a postgraduate program for activists and artists to co-learn so that artists read and critique human rights discourse while human rights advocates create artwork publicly. The aim is to engage critically with both fields of research and even more critically with their respective industries.

Art is a place of contestation, where soft power can be exercised, state violence can be laundered, and imperialist and colonialist languages and aesthetics can be enforced. Yet like activism, art is a place where politics are a constant exercise, in the funding, the chosen form, its audience engagement, and the positionality of its maker. We want to look into collectivity and collaboration rather than activist or artistic work driven by dreams of salvation. We want to be a space where artists understand that activism is not about them and their careers, and a space where activists understand that their special creative idea might actually already have a name and a long lineage in the arts.

So at this intersection of human rights and the arts, there are many more intersections. There are meetings and there are collisions, there are crossings and there are stoplights, there are mixtures and separations, overlaps and hierarchies. Inhabiting this troubled and promising space means committing ourselves to push beyond given ideas about human rights and the arts both simply being in the service of the other. Rather, the aim is to harness the critical energy unleashed in their encounter to re-think and to re-do them both.

Thomas Keenan is the director of the Human Rights Project and Professor of Comparative Literature at Bard College.

Tania El Khoury is the director of the Center for Human Rights & the Arts as well as Distinguished Artist in Residence in the Theater and Performance Program at Bard College.

How to cite this Resource