Memory of the Earth: Land Dispossession, Violence, and War in Colombia

CHRA will be screening Memory of the Earth: Land Dispossession, Violence, and War in Colombia, a program of three short films made in collaboration between the Colombian Truth Commission and Forensic Architecture on Wednesday, April 20 at 7:45 pm EDT at Upstate Films, Rhinebeck NY. The films center around the issue of land dispossession in Urabá, a region in northwestern Colombia, which has been gripped by political violence since the 1980s. Paramilitary groups and massacres have driven away thousands from their homes and agricultural land. More than 4 million hectares in Colombia are now considered to be stolen from small campesinos as a result of 60 years of war.

Each of the films in this program offers a different insight into the complex dynamics of violence that produce dispossession. The screening will be followed by a conversation with the co-directors, Hannah Meszaros Martin and CHRA’s 2021-22 Fellow, Oscar Pedraza Vargas.

The event is free and open to the public. Reservations can be made through this link.

The following films will be screened during this event:

Coquitos (43 min, 2021)
Coquitos explores the slow violence of dispossession. Sometimes this practice is backed by armed forces and physical threats to community members; other times, it is perpetrated through the slow movement of saltwater that seeps into the roots of plantains after a flood, rotting them from within. The film looks at the spectrum of violence that constitutes dispossession within the everyday lives of the residents of Coquitos. This violence is intimate, concerning the depth and width of the canal which borders their farms, which determines the flow of water that rises up and spills over, entering into the space of the home, their interior lives. The film looks at the future of dispossession as it is driven by the extreme precarity that the residents live with everyday, and embodied by the fragility of the land.

Honduras y La Negra (27 min, 2021)
The massacres of Honduras and La Negra occurred on March 4th, 1988. The victims were banana workers and union members. These massacres are emblematic in the history of the Colombian War, and exemplify the way in which state actors, as well as private and illegal sectors, plan and execute similar acts of violence. Honduras y La Negra uses archival materials, oral testimonies, aerial images, and 3D reconstructions to tell the story of the massacre and its reverberations throughout the country.

California (26 min, 2021)
California materializes the multiplicity of land dispossession. Farms, homes, fields, barracks, massacre sites are all continuously disappearing, erased by agroindustrial monocultures for exports to the U.S and Europe. While bananas visually capture the landscape, forming a uniform skin that wraps around the earth, an invisible web of intimate financial relations forms over this patchwork of fields and canals. This web is also a network of paramilitary control, which, along with and through the bananas, encloses and chokes this small community of campesinos. 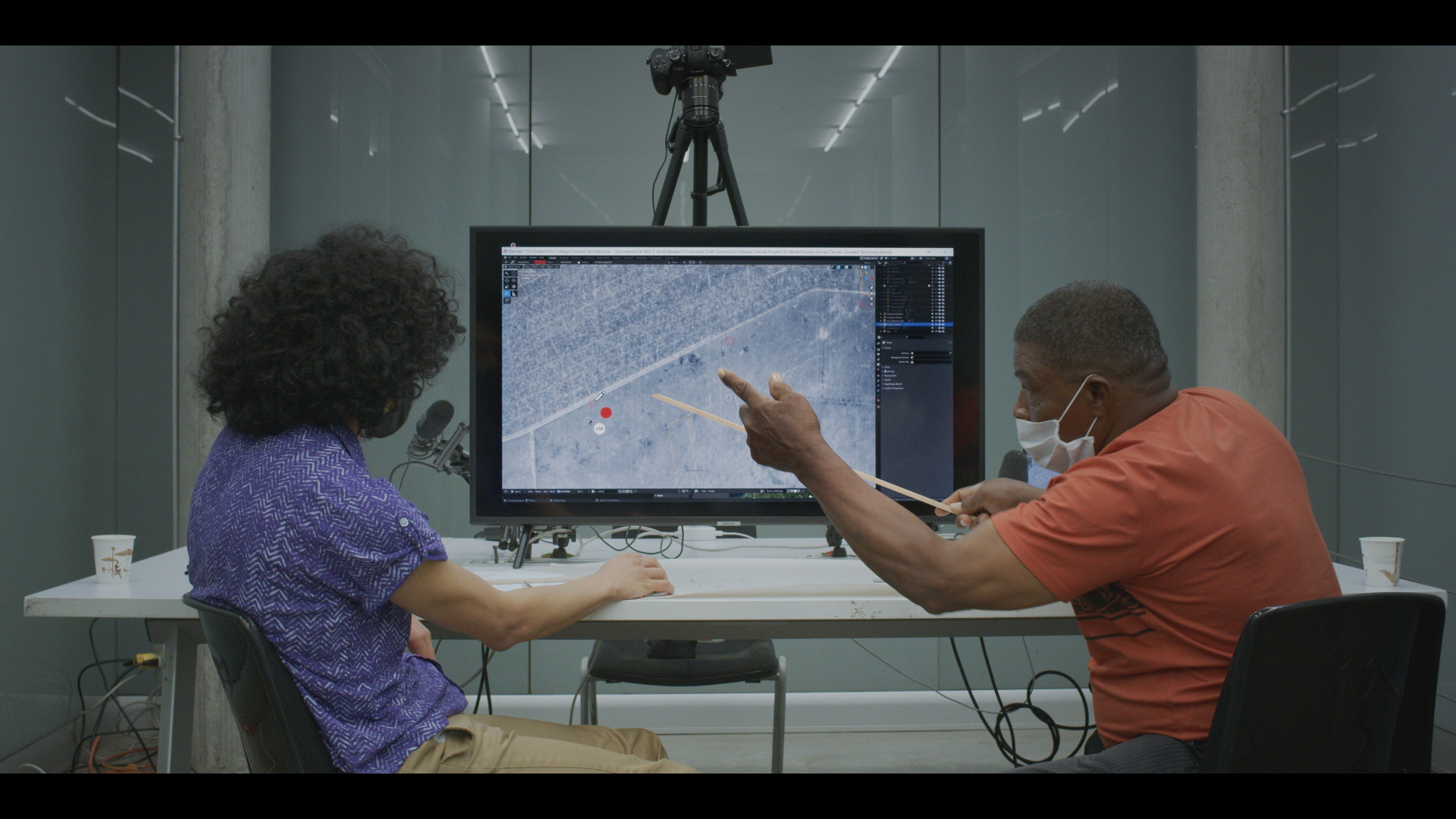 Oscar Pedraza Vargas is the 2021-22 Fellow at the Center for Human Rights and the Arts at Bard College. He is a historian and anthropologist with a PhD in Cultural Anthropology from CUNY Graduate Center and a BA in Anthropology and an MA in Social Anthropology from Universidad de Los Andes. He has worked extensively with grassroots movements associated with indigenous, farmer, and labor communities in Colombia and Latin America. He has also served as a main researcher for a collaboration between Forensic Architecture and the Colombian Truth Commission.

Hannah Meszaros Martin is an artist, filmmaker and writer, with a PhD from the Centre for Research Architecture, Goldsmiths, London. She is a Research Fellow and member of Forensic Architecture . With FA, she has exhibited at the House of World Cultures, MACBA, MUAC, and Banco de la Republica. She has exhibited solo work in Medellín, London, documenta, and Manifesta13. She contributed to the book FORENSIS, and has published with the Journal of Political Ecology, Journal of Visual Cultures, Open Democracy, Third Text and Different Skies.