Praise singing and movement is the celebration of presence. Dwala Lam’ is a praise song that reminds one of the groundedness that is inscribed in their ancestry.

These inscriptions, may come by way of being christened by a name that charts out your destiny, creates relief, a warm smile in a quiet moment or even conveys a message to the world.

The names that are often given in African cultures are the hopes and wishes of families that raise the bearer of the name. These names may be passed down through generations, they may be whispered to an expecting mother in her sleep.

Sethembile Msezane’s work is centred on commemorative practices. Motivated by African spiritual and indigenous knowledge systems, Msezane engages with performance, photography, installation, and video to shine a light on invisibilised Black women throughout history. She is known to facilitate transgenerational conversations and gatherings with Black women – such as the political figure and spiritual medium, Mbuya Nehanda, in the video Falling (2017) – to highlight their unacknowledged contributions in politics, revolutions, and quotidian Black life. Hers is a continued exercise in celebration, making sure to bring to the fore the histories of those that have been obscured and unsung. Through artistic intervention, Msezane makes visible lost histories, illuminating the path for possible present and future engagement.

In the newly commissioned Dwala Lam’ (2021) – which translates to “my rock” in Msezane’s native isiZulu – the artist continues many of the motifs introduced in her previous work. She focuses specifically on the notion of remembrance, not of forgotten people and histories, but of the propagative capacity for self-affirmation and self-healing. She deploys movement, song, vocalities and geology, to speak to an ever-present companionship (with one’s ancestors), to the things that ground us, to history and memory, and to the prominence of the ones after whom we have been named.

Decades after her birth, Malozi, as she was affectionately known to her great-grandmother, learned the origins of her ‘official’ name. The elder who has seen her beauty, nicknaming her “My Rose” – later to be isiZulu-fied into Malozi – was connected to her in ways that, up until that moment, Malozi had not been privy to. One day, Malozi’s mother suddenly recalled, as though through a whisper from an unseen angel that effectively pierced her subconscious, that the middle name of Malozi’s great-grandmother had been Sethembile, that is, “the one we trust”. Sethembile shared a name with a woman who had meant so much to her, and whose essence she had unknowingly carried around all her life.

Naming can be a forward-thinking process towards futurity. Adopting the name of an elder is both an homage to the original bearer of the name and a praise to the one who is adopting the name. It is an affirmation of being entrusted with the magnificence of those that came before you and a declaration that you deserve being a bearer and an ambassador of history and heritage. The unseen and unheard essences whose presence is hardly ever acknowledged integrate with earthly matter and form into that which we know to be human. Without them, our very beings falter. They are there, always, waiting to give guidance and to remind us of our worth when we are rendered amnesic. Dwala Lam’ – which connotes God – refers not only to the gods and ancestors that guide us, but also to the spirits that accompany us as we walk through life. While Msezane’s practice has been concerned with commemorating invisible figures that deserve visibility, here she does not propose invisibility as a challenge. She instead looks at invisible figures such as spirits and ancestors whose invisibilities are generative and necessary. We merely need to acknowledge and celebrate them.

The figure in the video is an ancestor that moves to the humming and incantations of its own utterances. The rhythm of her body, the movements of her hand, become a praise song, a poem that acts like a spiritual shout-out, confirming that one’s ancestors are often one’s biggest supporters and hype-spirits. The gestures of the hands, of the body, are echoed and enhanced by the rhythm of the sea. The sea is an essential repository for spiritual praxes – it contains history, it potentiates healing, it holds you, it cleanses. Later, we see silhouettes of the artist’s body strenuously move through the water as if to say, “the spirits that accompany you are available to withstand hardship so you don’t have to.”

The call and response between a melodic voice, repeated and accentuated by a whispering voice, attest to the abundance of love and support that are always already afforded to individuals. One only needs to listen attentively to access this wisdom. The ancestors resolutely state that their children should be proud of themselves – “Ziqhenye ngawe” (Be proud of yourself) – and affirm their being and importance to history – “Sakhile ngawe” (We have built a legacy through you). Msezane insists that ancestors are always there to remind you of your accomplishments and your worth when memory fails you. This happens through whispers that we hear when we are awake or when we are asleep, when we are searching for answers, and even when we are not aware that there are questions to be asked in the first place. They often come in the form of omnipresent, inaudible whispers.

Msezane makes effective use of the video mixer, creating a doubling, tripling, and even quadrupling effect of her body. The saturation of browns, blues, greys, oranges, and golds, with a chromatic subduedness that silently shouts at you from the screen, alludes to an intermingling with a cosmic world. There is an effortful creation of multiple selves, each disappearing and reappearing, merging into one another, only to separate again. The suggestive multiple selves seem to demonstrate that we are extensions of our ancestors and those that came before us. More aptly, it appears to exemplify that we are conservatories of the best parts of the people after whom we are named. Are we to imagine, then, that the different essences and spirits that leave and return to the core body are Msezane’s great-grandmother and the figures after whom she was named, ad infinitum? In a curious fashion, the spirits, doubles, or silhouettes always return to the source, treating it as a kind of repository, an anchoring point. This anchoring, according to Msezane, is integral to the entire process of being in the world.1 In Dwala Lam’, it is punctuated by the sizeable boulders that foreground snippets of a deceptive horizon. It is underscored by the proclamations – by the whispers that connote constant ancestral presence and immersion – “Sikhona Mntanami” (we are here my child) and “Asikulibelanga” (we have not forgotten you). The grounding of the figure in the work is one of ancestral foundation, of spiritual anchoring, of essential and replenishing self-holding. Dwala Lam’ signals to the many people and cross-generational anchors that always steer and manoeuvre us to where we need to be, physically, mentally, and spiritually. 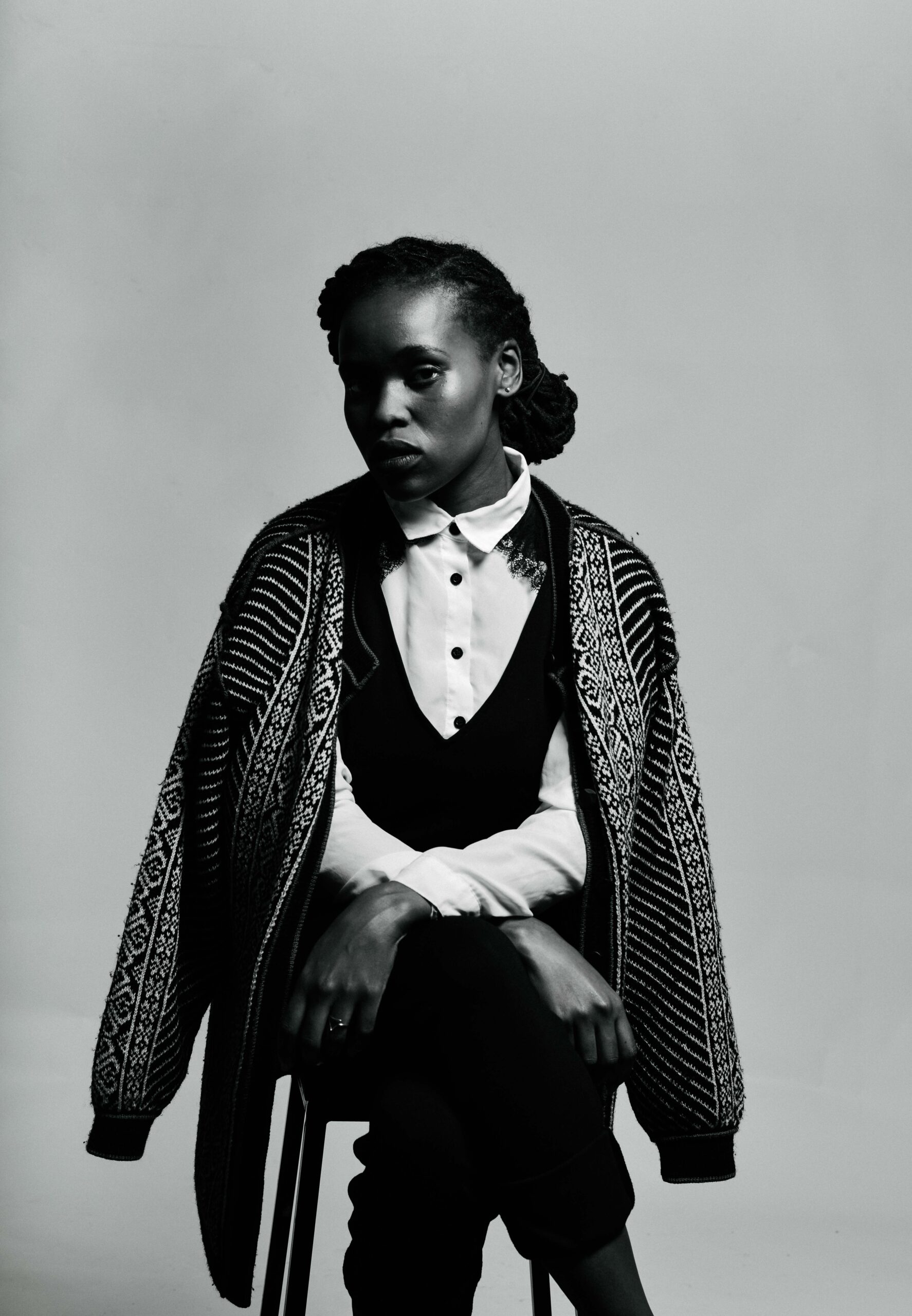 Sethembile Msezane was born in 1991 in KwaZulu Natal, South Africa. She has an MFA from the Michaelis School of Fine Art. Through performance, photography, film, sculpture and drawing, Msezane creates work heavy with spiritual and political symbolism, exploring issues around spirituality, commemoration, dreams, ancestry, and African knowledge systems. Her work also examines the mythmaking used to construct history, calling attention to the absence of the black female body in both the narratives and physical spaces of historical commemoration. 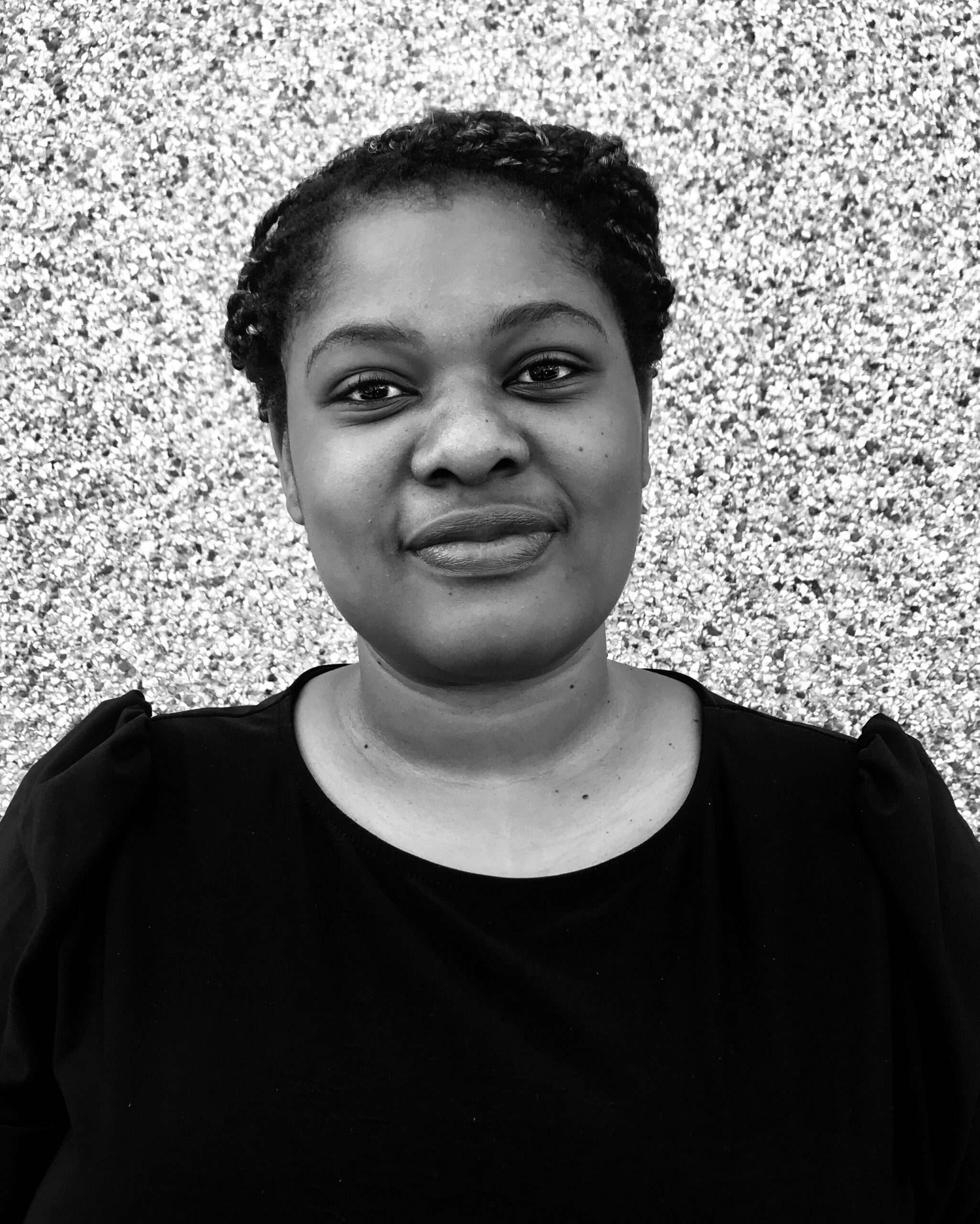